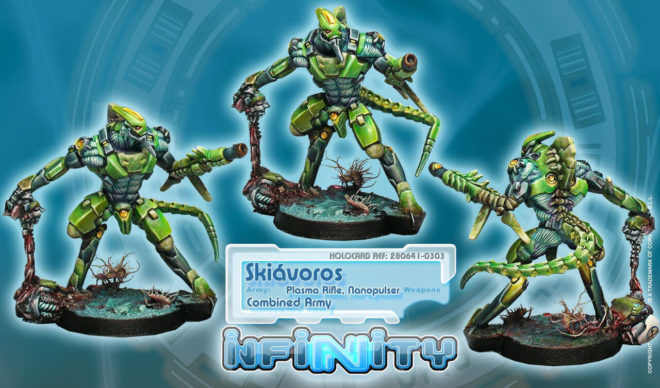 I first started using Skiavoros when I noticed that it had structure points instead of wounds.  This is an advantage in that you are immune to shock [and viral ammunition will only inflict one would].  I usually deploy a Kurgat near Skiavoros.  Note that G: Mnemonica allows the reroll of the engineering roll [with the use of a command token] to repair Skiavoros.

I have only used Skiavoros as a lieutenant, the question is whether or not to take the Sepsitor.  I make this decision based on my opponent; if I believe the majority of their strong pieces will have a cube, I take the Sepsitor.

The primary purpose of the Sepsitor is a deterrent.  On the active turn nobody wants to walk into Sepsitor range.  If you can position the Skiavoros in such a way as he can only be attacked from within that danger zone he is almost unassailable.  On the active turn the Sepsitor is mainly used to make intuitive attacks against camouflage markers with the Aspect WIP of 16.  This can also be used by walking into a smoke cloud and intuitive attacking out of it.

“The Machine does not sit in coach.”

Strategos Level 2 allows the holding of two models in reserve. [note that you must declare to your opponent at the start of deployment if you are using any level of Strategos.  This is an obscure ruling in a post somewhere referencing a rule from N2, but is still the rule as far as I know.  And when I declare this, I explain what it does starting with “it does not affect you in any way” as I have had even veteran players fail to hold a reserve because they thought it was prevented by Strategos L2]

When going first I like to hold my Q drone or Charontid in reserve as well as a forward deploying attack piece like the Zerat, Shrouded, or Speculo.  When going second its either two good ARO units or one and a piece I want to protect.

“Tonight, you party with us.”

Mnemonica makes Skiavoros generally a poor choice of targets for your opponent.  Skiavoros will be tough to kill and if your enemy is successful you jump into a specialist, preferably a hacker to make use of the high WIP and Lieutenant order.  It also allows you to be very aggressive if you see an opening.  A first turn aggressive Skiavoros can be devastating.  Being Medium Infantry, you are unhackable and, in ITS Season X, get forward deployment level 1. Despite 4-2 move it is possible to move most of the way across the board killing and Sepsitoring things then set up in a defensive position.  You will unlikely live through the opponents turn, but that is fine.  Remember once you get close most enemies will want to dodge to avoid the Sepsitor [or nanopulser] so you get to plasma them with little repercussion.

Below are two Skiavoros lists I enjoy.  Neither is set in stone at all.   I make small adjustments each time I play them to take into account the mission and/or opponent.

The above list is happy going first or second.

Going first you can push with either the Q-Drone, Skiavoros, or the Charontid in that order of preference.  The second turn is usually spent repairing drones and setting up to brunt the enemies second turn.  Third turn you move in/around as necessary for the win.

When going second the R-Drones and Liberto are out for ARO duty (remember to set up the R-Drones to get AROs only within 24 inches!).  If you lose both R-Drones and the Liberto its fine, you still have enough orders to repair the drones and do some stuff.

This list generally prefers to go first because of the Speculo.  With Skiavoros and the Mentor you will always have 10 orders to utilize with the Speculo if you want to.

We also have the Nimbus + grenade launcher here.  Once you’re fighting midfield don’t be afraid to spend all the group 2 orders to speculative fire one of these into position.  It’s worth it!  Just remember that the Nox doesn’t have to see any enemies to get the Nimbus in the right place, just the point on the ground you want to center it on.

Id consider moving the Mentor to the second combat group so you can upgrade the Q-Drone without losing an order from the main pool.  But that’s up to your various preferences, either way will work just fine.

This site uses Akismet to reduce spam. Learn how your comment data is processed.